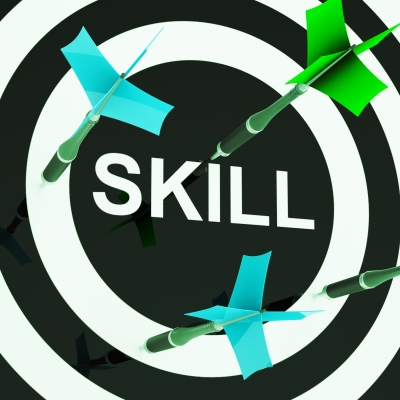 I used to think that the #1 skill for building a large network marketing team was “Prospecting.”

I got good at getting their information, setting appointments, and showing “the plan” at coffee shops and restaurants. I think I’ve been to all the Starbucks on this side of the Mississippi!

I even became a “mall shark.”  I’d go to a mall, try to be extra friendly and start a conversation with other shoppers.  Within a few minutes, I’d hit them with my “Are you interested in making more money?” speech.

Not only did this not go well, but it was very awkward and uncomfortable!  I felt like I was becoming a stalker, people were starting to look at me funny, and tried to avoid me! I thought I was going to get banned from the malls forever!

I also found that I was wasting a lot of time and money!  What I was doing was very inefficient because I was trying to talk to people who clearly were not interested in what I had to offer.

I soon discovered that the #1 skill I needed to master was NOT prospecting!

The #1 skill in network marketing in the modern era, requires leveraging the new technology like the internet and social media.  Unfortunately, it’s not likely that your upline can show you this skill because it’s so new, most network marketers don’t know about it.  Many network marketing companies are also still stuck in the old-school ways of building a team.

However, you’re in luck, because today, I’m going to reveal exactly how it works and how you can use this method to solve the single biggest problem in the network marketing profession…

…And it has everything to do with one word – LEVERAGE – resulting in the passive attraction of interested prospects to you everyday without talking to a single friend, family member or stranger in public.

And it will also radically reduce and eventually eliminate the time you currently spend prospecting. Traditionally, to begin building your business, you’d want to find new people who might become your customers and who might also want to build your a team under you.

And to do that, you’re normally taught to…

Now, does that stuff all work?

Absolutely, but those activities are very time intensive and inefficient.

And in today’s age…

Why wouldn’t you want to take advantage of more “modern” options that aren’t as time intensive as well?

Today, there’s one option you may have already heard of…

…without requiring us to leave home!

In fact, my friend Julie Burke recruited 80% of her team of 8,300 distributors using Facebook—while at home, raising her two boys, in just a couple of years.

But even with what Julie did with prospecting and recruiting on social media, is still a bit time consuming and there’s still a lot of sorting involved. You still gotta sift through the a-holes, the tire-kickers and the curious to find the few serious ones.

So we helped Julie develop a NEW modern skill, which no longer requires her to prospect at all (offline or online), people reach out to her everyday interested in joining her opportunity (last month she sponsored 45 people who reached out to her) and this skill has resulted in her growing a million dollar home business empire.

And it’s a skill, that in my opinion, is the #1 skill you can learn today as a network marketer to create maximum leverage, help you recruit more more people and you’re upline likely has no clue about… yet!

What is that skill? Now, I know that might scare a few of you who hear the word “sponsored” aka “advertising” which might cause you to immediately think…

But here’s the thing:

Your sponsored post budget could start at five dollars a day…

(So just don’t go to Starbucks and there’s your budget.)

…and the payoff is massive!

The way we use Facebook advertising (also called “Sponsored Posts”) is simple and wildly effective. (Think of how you got to reading this blog post – magic!)

So here’s how it works…

What if you could create Facebook posts designed to attract top quality prospects? For instance, you can have the post appear in the newsfeeds of the millions of people who follow Robert Kiyosaki, John Maxwell, Tony Robbins or Brendon Buchard.

You can also show your Sponsored Post to people that are interested in certain topics, such as health and wellness, nutrition, or fitness.

Imagine being able to get your message in front of the millions of people on Facebook following Jenny Craig, Weight Watchers, Nutrisystem, etc.

Would you ever run out of prospects or customers?

You’ve got a ton of options.

But keep in mind that your post is not supposed to pitch!

It’s supposed to lead with value.

It’s about what can you do for people and what you can show them to solve their problems. (Again, think of what’s happening on this blog post. Are you learning something?)

It doesn’t have to be complicated, either.

These will help draw people to you every single day so you never have to prospect (if you don’t want to).

The first type is called an…

Facebook’s algorithm knows who’s more likely to engage with your post—such as liking it, commenting on it, and sharing it.

This works great when you tease (but don’t disclose) your product or opportunity. If you focus on the benefit in the post – i.e. what you help people do or the problem you help them solve in their life…

People will often post in the comments and say…

They’ll even direct message you and engage in a private conversation.

This works because it’s not about you or your company; it’s about what can you do for people.

The reason people are asking for “more information” is because they believe you can help them solve their problem.

We have students who speak with over a dozen such prospects a day!

The only catch is you have to execute this tactic correctly (otherwise you’ll wind up repelling the very prospects you were wanting to attract).

The best part is that if you do this correctly, people aren’t even clicking to read the blog post, instead they’re all just commenting and saying…

Now, what more valuable skill can you learn in network marketing and direct selling than the ability to passively attract people to you and your opportunity?

Taking this a step further, the second type of ad you can run on Facebook is the…

Messager ads includes a special call to action function, which directs people straight to a private message with you.

It’s similar to the engagement type of ad described above, but it cuts out the “middleman” of the blog post — so you don’t need a piece of content, or even a website.

And when they click on the ad using their smartphone, it opens up the Messenger window and begins a conversation with you.

You can attract any audience you choose

Depending on what you’re promoting.

Basically, if somebody has a Facebook Page, you can target their audience (for example, Robert Kiyosaki’s audience).

You also want to go after the audiences of a company to see if any of the distributors who are about to quit or unhappy, who may be looking for a new home. The cool thing here is that you can qualify and interview these people before they join your team!

You get to say “No”, instead of the other way around. When you have an abundance of prospects, you can do this!

The options are limitless!

Now that you’ve learned how to create massive leverage by attracting prospects through placing Facebook Sponsored Posts, do you know how to actually recruit a prospect that seeks you out?

Do you know what to say to enroll them?

Contrary to what you might have been taught, the process of enrollment can also be largely optimized and automated, so you’re not having to speak with everyone one-on-one—if you don’t want to.

Like I said, you can qualify via an actual application process.

Then I highly recommend you register for and download my free online recruiting bootcamp.

You’ll see the exact online business building strategies I use to passively generate 300–500 leads per day, 30–50 customers per day, and enroll 70–100 new serious business builders into my business each month.

All with absolutely no phone calls, home parties, or hotel meetings.

And don’t worry, this training is 100% generic and designed to help YOU build YOUR business.

So if you’re ready to get started…

And if you found this content helpful, I would love if you shared this with any other networkers whom you think can benefit from a little leverage!

To Your Online Success,

David C Figueroa is a psychologist with over 35 years of experience teaching personal development. An awesome success coach, and internet marketer. Now retired, he has refocused his goals into helping network marketers grow their businesses online.